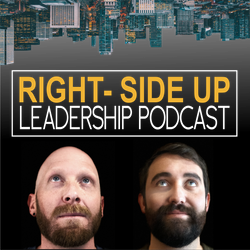 About Right-Side Up Leadership Podcast

Leadership is hard. And if you are like us you want to continue to do it without losing your soul and burning out. Join Alan and David as they have practical conversations on health and leadership every week. They host pastors, business leaders, authors, creatives, athletes and entrepreneurs to ask questions, hear stories and share tools that help you lead healthy and for the long-haul. This podcast is brought to you by Stay Forth Designs find out more about who we are and what we do at www.stayforth.com

119 - Ben Malcolmson "From pee wee dropout to the Seahawks"

On today's episode, Alan sits down with author, speaker, and right-hand man to NFL coach Pete Carroll, Ben Malcolmson. Ben shares his unlikely story that has brought him all the way to the NFL sidelines every Sunday. About Ben Author, speaker, and mentor figure, Ben Malcolmson has been the right-hand man to Seattle Seahawks head coach Pete Carroll for the last 13 seasons. During his college years at USC, Ben was a student newspaper reporter for the Daily Trojan who tried out for the top-ranked football team simply to write a first-person account of the walk-on tryout process. Having not played football since 5th grade, he surprised himself and countless others when he got the call that he had earned a roster spot as a wide receiver on the 2006 Trojans. After his one fairytale season ended, he became Director of Online Media for USC Football, where he created and managed the groundbreaking online presence for the Trojans as well as PeteCarroll.com. Since then, Ben has served Carroll and the Seahawks for the past 10 seasons. Also, he has been a contributing writer for Sports Illustrated, The Associated Press, USA Today, and The Dallas Morning News. Ben currently shares his unfathomable story to churches, youth groups, businesses, schools, and anyone else who desires to be inspired to discover their purpose. Connect with Ben Walk On Facebook Twitter Instagram YouTube Partner with us StoreHouse Take your next right step Inquire about coaching