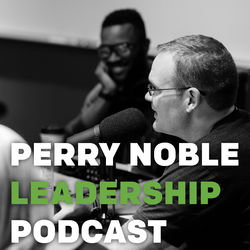 Perry Noble is the former Senior Pastor of NewSpring Church in South Carolina. Perry will be the first to say that there's no secret formula for being a successful leader, but there is a PERFECT example – Jesus Christ. This podcast is for those who are ready to be challenged in their faith and stretched as leaders and for those willing to do whatever it takes to be more like Jesus.

Five Leadership Traps That Are Easy To Fall Into

Episode SummaryMy first speeding ticket was on Marchbanks Road in Anderson, SC. The funny thing: when I began telling people about it, everyone told me the exact spot where I was pulled over!It was a speed trap! We all know about speed traps when we're driving but did you know, there are leadership traps as well?Leadership traps will literally tear down what has taken time to build throughout years of leadership.Trap One: Personal Insecurities When we allow personal insecurities to dominate our mindset they will always manifest themselves in our ability to lead. Self awareness is one of the greatest things a leader can have. The sooner a leader recognized his/her own personal insecurities, the sooner they can begin to work through them. For example, when I first began my leadership journey my personal insecurities came out in two major ways...1. SarcasmThe best way for me to deal with something was to make a joke about it. Sarcasm will work short term, but long term it will cause people to lose respect for you as a leader. 2. Passive Aggressive Behavior I learned the hard way that guilt drives people but people do not want to be driven, they want to be led. As a leader, I cannot allow my personal insecurities to drive me down a path where I do what is easy rather than doing what is right. Trap Two: Mistakes Making mistakes doesn’t mean you are a bad leader. It means you are trying to be a leader. If a leader isn’t making mistakes, more than likely, they are not taking enough risks. One of the biggest barriers that holds leaders back is an unwillingness to execute. I’ve told people for years: ideas are crap, execution matters. When we execute, there are unforeseen circumstances and situations that develop, which does not dismiss the need for leadership; it actually requires it. The only time mistakes are bad is when we continue to make the same one over and over again. At that point it isn’t a leadership issue, it’s a competency issue.It’s sorta like the great theologian Mike Tyson once said, “Everyone has a plan until they get punched in the damn mouth!” Trap Three: The False “Care Assumption” Everyone on a team should add value. The more a person cares, the more value they will add.I’ve started two churches and a business. At times, I’ve been extremely bothered because no one seemed to care like I did.Don't get me wrong, I have a great team. They all love their jobs, but no one will ever love it as much as me.You can hire talent; you can’t hire heart. Trap Four: They Can Read My Mind Even the people who work closest with you cannot anticipate what you want. I’ve discovered the clearer I am about expectations, the more I set the team up for success. I used to get so angry as a leader when I walked into a room and things were not what I had expected.One day I was venting and a friend told me, “Hey P, if you had just told us what you wanted we would have made it happen, but we can’t read your mind.” This is when I came up with the phrase, “We cannot hold people accountable for unspoken and unrealistic expectations.” Trap Five: Don’t Get To Close To The People You Lead If I engage people’s minds I can impact the way they think—but if I can engage their hearts I can impact the way they feel. And impacting their hearts does not come about through barking order. have heard this a lot and there are really smart people on both sides of the debate. I personally know how hard it is to be close to people and things go completely wrong. However, I still say its ok to be close with the people you lead. Why? Because I think Jesus was the greatest leader who has ever lived on the planet and He had a group of leaders He was super close to.Take your team to lunch, ask questions, show genuine interest. …