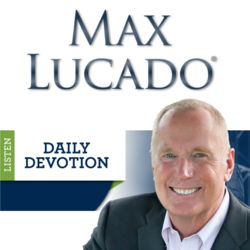 Max Lucado is a preacher with a storyteller's gift — a pastor's heart and a poet's pen. Max's message is simple: God loves you; let him. Max serves the people of Oak Hills Church in San Antonio, Texas. He preaches and writes to the hurting, the guilty, the lonely, the discouraged.

It’s the repeated pattern in Scripture. Evil. God. Good. Evil came to Job. It tempted him and tested him. Job struggled. But God countered. He spoke truth and declared sovereignty. Job, in the end, chose God. Satan’s prime target became came God’s star witness and good resulted. Evil came to David and he committed adultery. Evil came to Daniel and he was dragged to a foreign land. Evil came to Nehemiah and the walls of Jerusalem were destroyed. But God countered. Because He did, David wrote songs of grace, Daniel ruled in a foreign land, and Nehemiah rebuilt Jerusalem with Babylonian money. … Listen Now